Bishop Longin of the Serbian Orthodox Church addresses the Diocese 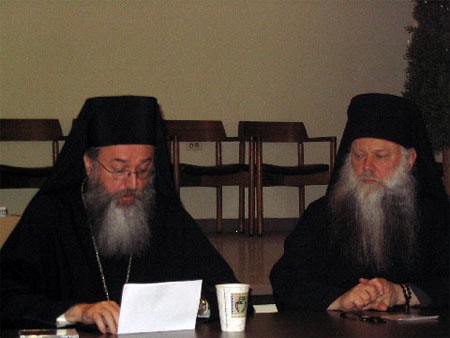 On March 23, His Grace Bishop Longin addressed the clergy of the Chicago and Detroit Diocese on the reconciliation of the Serbian Church. His Grace stated, in part, the following:

"The Serbian Church, in the period after the war, passed through one of the greatest temptations in her history. In 1963, the 'American Schism' occurred, brought about firstly as the result of our spiritual state, and greatly helped along by the communist regime in the Fatherland.

"This conflict in the Church, in part due to the political state of our people, grew into a serious ecclesiastical problem. This can be seen in the fact that the Bishop of America and Canada, Dionisije, along with a good portion of the clergy, was defrocked; they, being separated from the Church, created the 'Free American-Canadian Diocese.' Their excuse for remaining outside the embrace of the Church was the communist regime. They stated that they would not listen to any orders coming from Belgrade, because they were under the influence of the godless regime. I remind you that this was an administrative schism, which did not involve any heretical teachings of the church. The Assembly of the Serbian Church did not accurately evaluate the spiritual and political reality of those times. When things began to take the wrong course, it was all very difficult to stop. Unfortunately, our people in America, Australia, and Canada, and in some parts of Europe, went through unbelievable difficulties. They became disunited, estranged, spiritually crippled. The schism divided households and families. Thus, there were cases where a father would be on one side, and his son on the other; one brother on one side, and the other in the oppositionЙ

"During the course of the schism, there were attempts to resolve this problem, but they all paled in the attempt, and, of course, did not bear fruit. Both sides of the schism felt greatly insulted, all made accusations, and it seemed as though this would never come to an end. The American court system benefited from our quarrels. Imagine, we brought about one of the longest and most expensive court cases in the United States. It lasted a full 17 years. Millions of dollars were spent, and thousands of insults and accusations were made. The Serbian Church ultimately won the case, but this was no longer of any use to anybody. The situation remained the same. We were disunited, with a large portion of the people remaining outside of the Church, and not even aware of it.

"After all of this failure of useless attempts to reunite, the things we were not able to do, God did. God Himself helped us by, at the appropriate time, bringing Patriarch Pavle to the head of the Church. Patriarch Pavle is the personification of sainthood. He is spiritual, pious, and humble. These are the virtues that adorn a true servant of God. Metropolitan Irinej, who headed the 'Free Diocese of America and Canada,' soon to be the 'Metropolitanate of New Gracanica,' joined to help him in the great task of resolving the question of the schism in such a manner that even today we are not fully aware of the meaning and greatness of this moment. The Patriarch covered all our sins with his love. He was ready to 'kneel' before the people of the former 'Free Diocese' and to tell them: 'come, brothers, under the wings of the Church.' The Patriarch was not demanding justice, he did not try to place blame, he did not become fixated on any minute details, but rather filled with true pastoral concern for the faithful members of the Church, he protected them all in a fatherly manner.

"The Holy Assembly of Bishops of the Serbian Orthodox Church, at the suggestion of the Patriarch and the Holy Synod, returned the dignity to the bishops and majority of the clergy, as well as that of the people, the former 'Free Diocese of America and Canada,' and this was crowned with the Holy Liturgy on the Feast of the Meeting of the Lord in Belgrade in 1992.

"With the achievement of Eucharistic unity, not all of the problems were resolved in regard to administration, but we are working on that. Ultimately, that is not a key question in the Church. Pastorally it is first important to be united through the Body and Blood of our Lord Jesus Christ. We are really spiritually united, ecclesiastical order has been established, and everything else will be accomplished in due time. The wound on the body of the Church and people has been healed. Now we are gradually solving the problem of the reorganization of the diocese of the Serbian Orthodox Church on this continent.

"I consider this to be a great success in our Church and a definite act of God. I feel that nobody else could have so successfully accomplished this task, as did Patriarch Pavle. The implementation of a purely judicial method in this case would have left us disunited for a long time, considering the character of the Serbian people.

"Keeping all this in mind, the case of the Russian Orthodox Church Outside of Russia and the Moscow Patriarchate appears quite simple. As far as I know, nobody was been defrocked in this conflict. Because of this fact, this division in many ways does not seem to be as serious a conflict. In any case, it does not even minimally have the same characteristics as the Serbian schism.

"In my opinion, it would be a blessing in the true sense of that word, for the Moscow Patriarchate and the Russian Orthodox Church Outside of Russia, to confirm the unity at their Assemblies. After all, in the spiritual sense, that unity always existed. This would be the most dignified way to resolve this important question. And believe me this would have a positive effect on all Orthodoxy. The Russian Orthodox Church today has an important mission in the role of strengthening the Church amongst our Russian Orthodox brothers. Without a doubt, this would also help to strengthen us Serbs as well as other Orthodox peoples. With such an act, a brighter future and role of the Orthodox Church would arise throughout the world. For that we pray to God, and in the spirit of brotherly love, we greet all of you gathered here today.