Pastoral Retreat and Conference of the Diocese of Chicago and Detroit 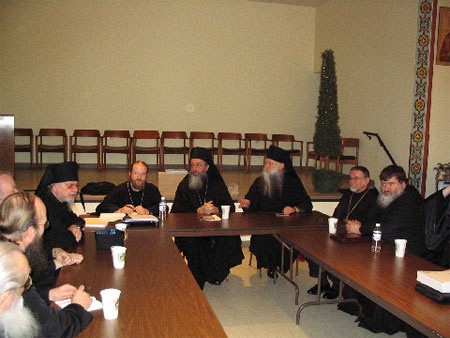 On the evening of March 22, His Grace Bishop Peter of Cleveland performed the Rite of Extreme Unction at the Cathedral of the Protection of the Holy Virgin, along with the clergymen gathered for the Retreat. His Eminence Archbishop Alypy prayed during the service, attended by over one hundred worshipers. The last prayer of this mystery was read over His Eminence.

On March 23, Bishop Peter headed the Liturgy of Pre-Sanctified Gifts, along with 16 priests of the Diocese. During the minor entrance, Priest Valery Vovkovsky was awarded the nabedrennik. During the Liturgy, Archbishop Alypy and Bishop Longin of New Gracanica (Serbian Orthodox Church) prayed in the altar. At the end of Liturgy and the trapeza, Bishop Longin told of the history of the schism in the Serbian Church and of his opinion of the beginning process of rapprochement between the Russian Orthodox Church Outside of Russia and the Moscow Patriarchate. Bishop Longin's thoughts, based on his contacts with representatives of both parts of the Russian Church, drew a lively discussion. Vladyka Longin had graduated Moscow Theological Academy and served for many years in Australia and the USA, where he had the opportunity to acquaint himself with the clergy and flock of the Russian Church Abroad.

After Bishop Longin's talk, the Conference began. Bishop Peter read a speech on the life of the Diocese. Then several members of the Diocesan Council spoke, reporting on various aspects of diocesan and parish life. The Conferees unanimously adopted a resolution and decided on a document on extreme end-of-life issues. After lunch, Reader Andrei Urtiew, the Diocesan Treasurer, reported on the Diocese's finances.

On the morning of March 24, a statement of the clergymen was adopted, and several administrative matters were voted on. Then, Archimandrite Daniel made two reports on Islam and Orthodoxy in Indonesia. As was reported earlier, Archimandrite Daniel is a clergyman of the Diocese of Australia and New Zealand. At the present time, Fr Daniel is studying at Ohio State University and is temporarily ministering to the Orthodox community in Columbus, OH.

The next pastoral conference will be held in September of this year in Houghton, MI.