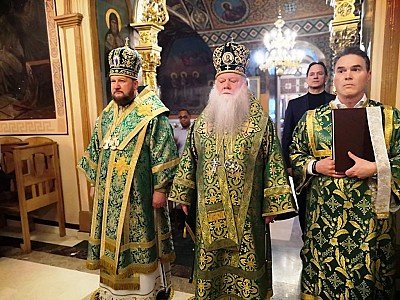 On January 17/30, 2020, His Eminence Archbishop Peter participated in the Divine Services in honor of St. Anthony the Great at the Sts. Peter & Paul Church in Moscow – the Podvoriye (Metochion) of the Serbian Orthodox Church in the Russian capital. This day marked the name’s day of the representative of the Serbian Orthodox Church in Russia: His Grace Bishop Antony of Moravichsky. Archbishop Peter is in Russia to participate in the anniversary celebrations of Patriarch Kyrill’s enthronement, to take part in discussions surrounding the Centenary of the Russian Orthodox Church Outside Russia as the chair of the Synodal Committee organizing the jubilee activities, and to participate in the ongoing discourse with the Education Commission of the Russian Orthodox Church regarding ways that the Pastoral School of the Diocese of Chicago & Mid-America can best serve the missionary needs of the greater Russian Church. His Eminence will remain in Russia for approximately another week before returning to the diocese to lead the celebrations of the New Martyrs and Confessors of the Russian Church on February 8 and 9 at the Diocesan Cathedral of the Protection of the Mother of God in Des Plaines, Illinois. On February 9 His Eminence celebrates his own name’s day, being named in monasticism after the New Hieromartyr Peter of Krutitsa, who is commemorated on the feast day of the New Martyrs.

An article in Russian regarding the festivities of the day can be found here: http://serbskoe-podvorie.ru/news/2384/

A photo gallery of the events can be found here: http://serbskoe-podvorie.ru/photo/2383/