On Sunday, October 18th, the faithful of Saint Basil the Great Church in St Louis, Missouri, honored the parish founder Archpriest Martin Swanson, as his retirement from rectorship was announced by His Eminence Archbishop Peter at the diocesan cathedral on the feast of the Protection of the Mother of God on October 14th.

Being unable to travel because of the pandemic, His Eminence sent Archpriest Viktor Trotskyy, the rector of the Dormition Cathedral in Detroit, as his representative.

Fr Martin could not participate at the Vigil on Saturday night, as he did not feel well. The Vigil was served by Archpriest Viktor, St Basil’s newly appointed rector Archpriest Sergii Alekseev, as well as parish deacons Ephraim Galloway and Thomas Nichols. The Sunday Divine Liturgy was celebrated by Archpriest Sergii and concelebrated by Protopresbyter-Stavrophor Radomir Chkautovich (a retired Serbian priest who made St Basil’s his church home), Archpriests Martin and Viktor, as well as the parish deacons.

The Divine Liturgy was very triumphant. The temple was filled with the number of the faithful it had not seen since the beginning of the pandemic. Many of those present (a great deal of them being children and the youth) partook of the Holy Communion.

After the dismissal, the clergy came out on the amvon where Archbishop Peter’s letter to the parish on the occasion of Archpriest Martin’s retirement from being the parish rector was read. Then Fr Sergii spoke about Fr Martin, who founded the parish back in 1985, when it saw the light of day in a converted two-car garage. After a few years the temple was enlarged to 800 square feet. Almost three decades later, in 2014, Archbishop Peter broke ground for the construction of the new temple for St Basil’s parish. A year later God blessed the community to move into its new home – the current St Basil the Great Orthodox Church. Under Fr Martin’s leadership the congregation grew from a handle of people to a very sizable church family.

In gratitude to Fr Martin for being its founder and rector for so many years, the faithful of St Basil’s presented their beloved pastor with a beautiful jeweled Cross. Fr Martin’s wife Matushka Katherine was also honored as the most faithful supporter of her husband and for being instrumental in many aspects of parish life. Several times the deacon would intone “Many Years” and several times the temple resounded with the voices of the choir and of all the faithful wishing Archpriest Martin and Matushka Katherine many years. 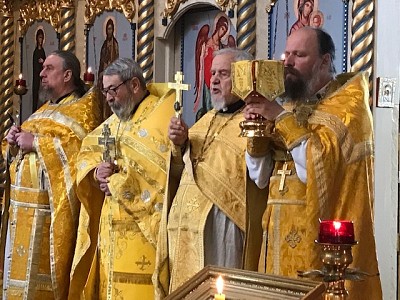 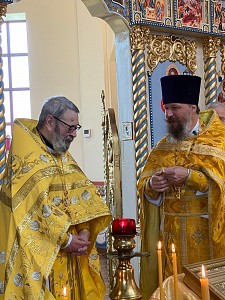