From October 1-4, 2021 the visit of Archbishop Peter of Chicago & Mid-America took place at the Holy Dormition Svyatogorsk Lavra.

The arrival of Archbishop Peter, who at one time was the cell-attendant of St. John, Archbishop of Shanghai and San Francisco, was planned for early July, when in the homeland of the saint, in the village of Adamovka, celebrations were held on the occasion of the 125th anniversary of the birth of the saint and the 100th anniversary of the Russian Orthodox Church Outside of Russia. At that time it was assumed that Vladyka Peter would take part in the festive services and consecration of the monument to St. John. Illness prevented him from making the trip from the USA to Ukraine at that time, but together with his blessing, which he conveyed through Archpriest Gregory Joyce, Secretary of the Diocese, he also promised in the near future to make a trip to the homeland of St. John, the then Misha Maksimovich, and to the Svyatogorsk monastery that the future St. John so loved to visit with his parents.

Vladyka Peter kept his promise and arrived at the Holy Mountain of Svyatogorsk on October 1. At 3:00 p.m. that day he was greeted at the entrance of the monastery by Metropolitan Arseny of Svyatogorsk, after which the two archpastors met. Archbishop Peter thanked the Abbot of the Monastery for so honoring the memory of St. John, for building a skete and a church in the name of St. John, and presented a gift to the monastery of a panagia of St. John’s. During their further discussion Vladyka Peter explained that St. John had known him, his parents and brothers since childhood, congratulated them on their name’s days annually, and these congratulations were preserved by him and are guarded as precious relics. Vladyka Peter also spoke about the last days of the saint's earthly life, his death, details of the transportation of his body from Seattle to San Francisco, and other interesting information in this regard, since at that time the present Archbishop Peter was constantly with Vladyka John as his cell attendant.

Archbishop Peter and Metropolitan Arseny then proceeded to the nearly Dormition Cathedral of the Lavra, where Vladyka Peter had the opportunity to venerate the Svyatogorsk Icon of the Theotokos, as well as the relics of the Venerable Fathers of Svyatogorsk. Metropolitan Arseny led the excursion and provided details about the temple, the icon, and the saints of God resting there.

Next, Archbishop Peter was acquainted with the icon painting school within the walls of the Lavra, and with the building of the new iconostases in the temples of the Lavra. The iconographers took a commemorative picture with the hierarchs.

Vladyka Arseny spoke about the history of the Lavra, historical relics collected over the past 30 years, icons of various icon-painting schools since the 16th century in the halls of the Lavra Museum and the Lavra sacristy. Vladyka Peter left an entry in the museum's visitors' book with his impressions of the museum's exposition. After this, Archbishop Peter visited one of the newly created Lavra churches in honor of the Venerable Fathers of the Lavra, the walls of which are decorated with murals in the tradition of Byzantine frescoes of the 12th - 13th centuries. The sacristy adjoining this church houses a collection of world-renowned Christian relics: including a particle of the Tree of the Lord's Cross, and many other holy relics. Archbishop Peter also had the opportunity to see unique holy images that have survived from the sacristy and the iconostasis of the Assumption Cathedral of the Svyatogorsk Hermitage. After that was a visit to the Church of the Nativity of the Most Holy Theotokos, where there is an icon of the Archangel Gabriel from the royal gates of the side chapel of the Assumption Cathedral, the story of which was told by Metropolitan Arseny. The guests also visited the library, the classroom and the halls of the brotherhood refectory.

The second day of the visit began with a visit to the various sketes of the Lavra. First was a trip to the skete of the Monks Anthony and Theodosius of the Kiev Caves, with a visit to an ancient cave temple and the nearby chapel in the name of the Venerable Fathers of the Kiev Caves. Vladyka Arseny told the story of the founding of the temple, the confessors of the monastery, and the monks of the monastery buried at the entrance to the temple in the 19th century, as well as the modern reconstruction of the ancient temple and hermitage, the construction of a bell tower and a chapel in the Ukrainian Baroque style, and the creation of murals in the temple and the chapel.

After this there was a visit to the All Saints Skete, at which the distinguished guests were met by the Prior of the skete, Archimandrite Ambrose. An excursion took place around the territory of the skete with a discussion of the monastery cemetery located there. Vladyka Peter became acquainted with the architecture of the modern wooden churches of the skete, talked with the brothers living there, and took a commemorative photo with them. Having familiarized himself with the agricultural work of the Lavra and the apiary, which are located there, Vladyka Peter visited the skete refectory, where he tasted the monastery's honey and tea from a samovar.

After the All Saints Skete, Archbishop Peter and Vladyka Arseny visited the ancient monastery in the Holy Cliff, where they met, talked with, and blessed a group of pilgrims who had arrived from various locations. After praying in the St. Nicholas church, and viewing the picturesque mountains of Svyatogorsk jutting forth from the chalk white cliffs, Archbishop Peter and Metropolitan Arseny departed for the home of St. John of Shanghai and San Francisco, the village of Adamovka, where the campus of the St. John's skete is now located.

According to the program, on October 2, in the afternoon, Archbishop Peter of Chicago & Mid-America, following a meal, will familiarize himself with the buildings of the skete on the site of the Maksimovich estate, and will lead the all-night vigil in the Church of St. John of Shanghai and San Francisco. Reporting on this and the rest of Archbishop Peter’s stay will be continued in a future posting.

A Russian language article on this part of Archbishop Peter’s visit to Svyatogorsk with many excellent pictures can be found at the web site of the Svyatogorsk Lavra: https://svlavra.church.ua/2021/10/03/arxiepiskop-chikagskij-i-sredne-amerikanskij-pyotr-lukyanov-v-svyatogorskoj-lavre/ 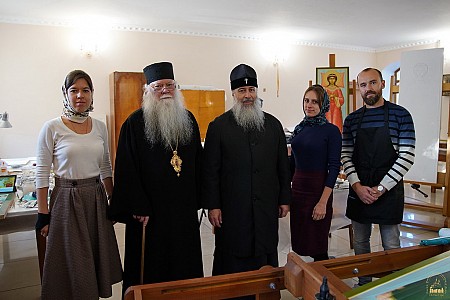 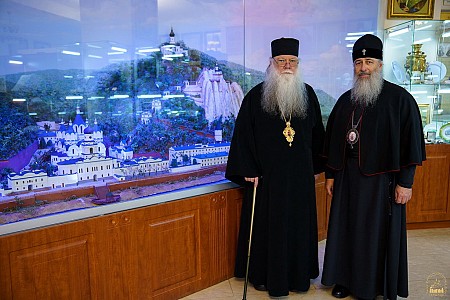 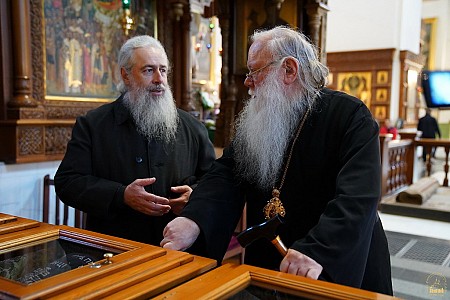 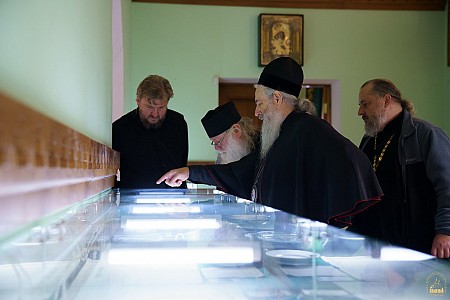 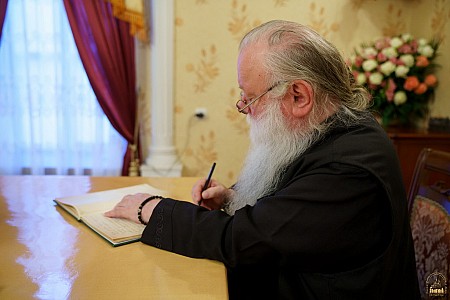 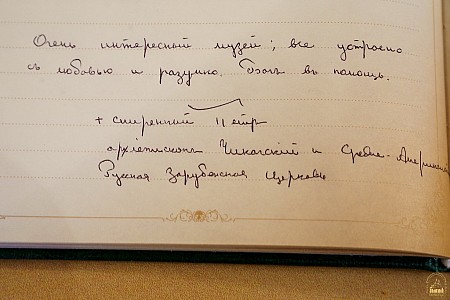 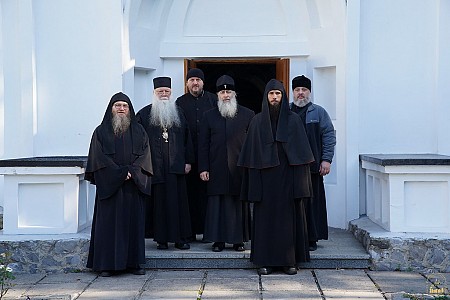 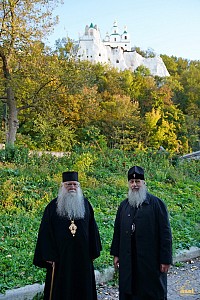 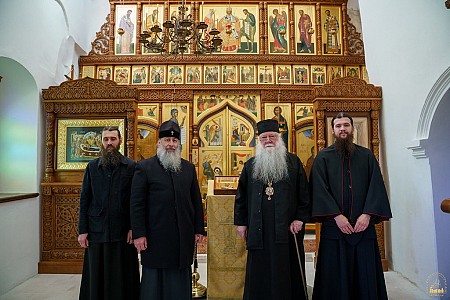 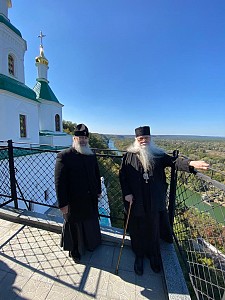 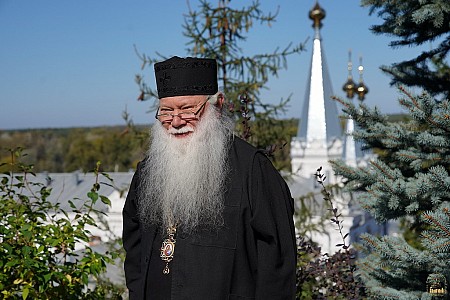 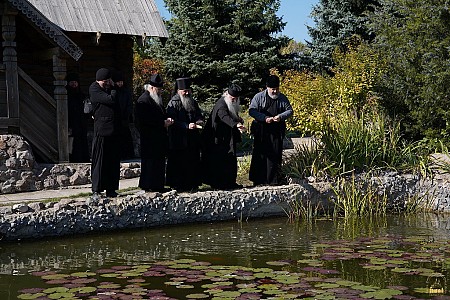 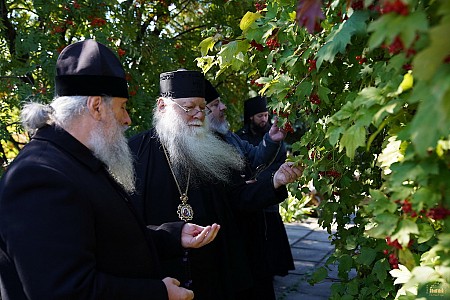 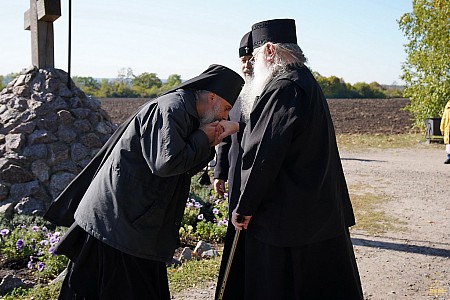 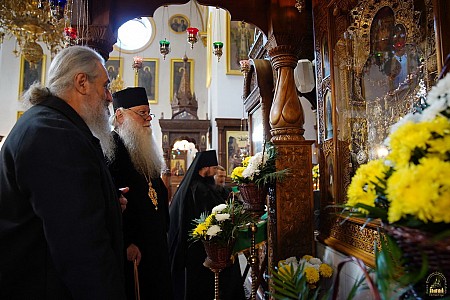 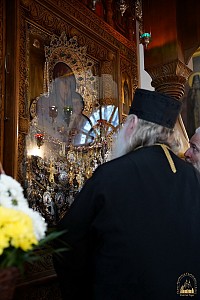 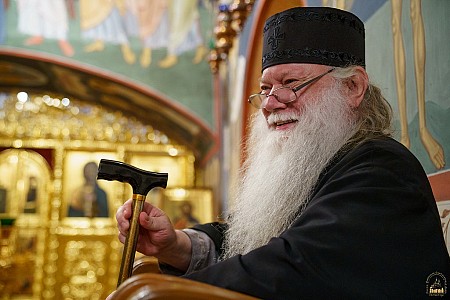 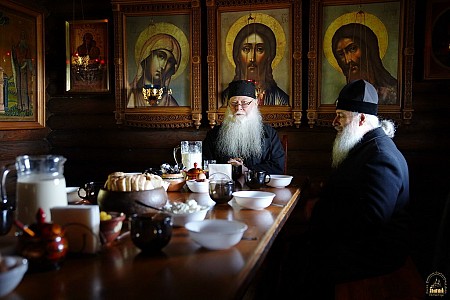 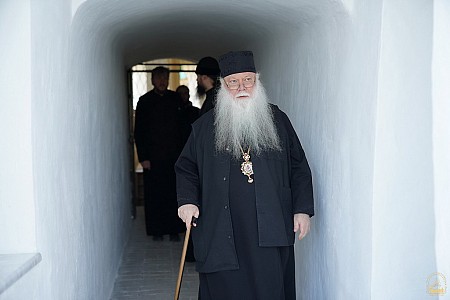