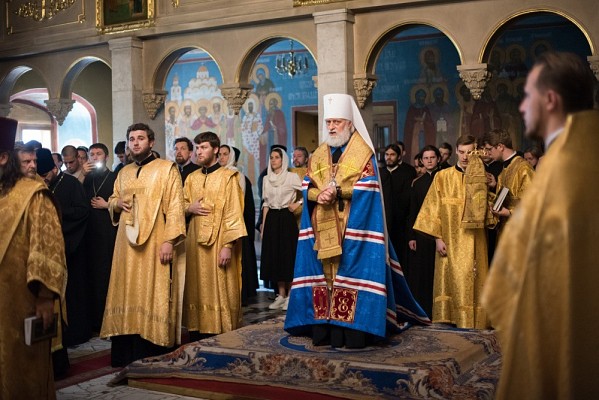 Deacon Peter Longan of our Ann Arbor St. Vladimir parish graduated from Moscow Theological Academy on July 15, 2018. Below is an account of the graduation ceremonies from the web site of the Academy:

A translation of the information at the link above can be found here:

On July 15, 2018 a triumphal ceremony was held on the occasion of the day of graduation at the Moscow Theological Academy. The graduation of the 2017-2018 academic year was the fourth for Doctoral studies, the seventieth for Master’s students, seventy-first for Bachelor's students, the forty-third for the Choirmaster School and the twenty-fifth for the Icon Painting School of the Moscow Theological Academy.

In the Protection of the Mother of God Academy temple, His Eminence Eugene, Metropolitan of Tallinn and All Estonia, served a Thanksgiving Moleben according to the occasion the conclusion of the academic year. Following the Divine Service, Metropolitan Eugene addressed the faithful. He read the salutary address of His Holiness Patriarch Kirill of Moscow and All Russia to the graduates of the theological schools, as well as the salutary address of the [newly-appointed] Rector of the Moscow Theological Academy, Archbishop Ambrose of Verye, and also personally congratulated the graduates on their completion of studies at the Academy: "... Now you are being called to independent ministry. This is a responsible ministry, for it is done for the sake of the Lord and for the salvation of others ... I think each of us should understand that the level that he received is not a limit, for there is no limit to spiritual perfection. Considering how you will embody the spiritual experience of the Church in your life, others will follow - or will not - on the path of salvation. "

At the end of his speech, His Eminence Eugene, Metropolitan of Tallinn and All Estonia, presented graduates of Moscow theological schools with diplomas and commemorative gifts.

After the awarding of the diplomas, a celebratory banquet was held, during which the graduates spoke words of thanks to His Holiness Patriarch Kirill, Metropolitan Eugene, who headed the academy for 23 years, administrations, teachers and staff of the Academy.