107th Anniversary of St. George Church in Michigan City, IN 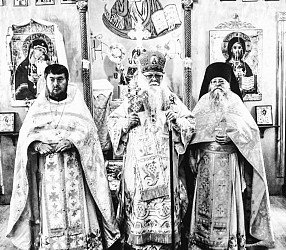 His Eminence Archbishop Peter made an archpastoral visit to St. George Orthodox Church in  Michigan City, Indiana on Sunday August 12th. The occasion was to mark the 107th anniversary of the laying of the cornerstone of the church which took place on August 28th 1911. St. Bishop Raphael Hawaweeny, bishop of Brooklyn, vicar of the Syro-Arabian mission of the Russian Orthodox Church sent Fr. Basil Kerbawy of New York and Fr. Philipous Abou-Assaley of Grand Rapids to perform the ceremony.

The parish was founded and incorporated in October of 1910 and consecrated by St. Raphael on Sept 4,1914, six months before his untimely death on Feb 27 of 1915. In 1989 his body was removed from Brooklyn, NY, to Ligonier, PA., where his relics were found to be incorrupt, was canonized in 2000, by the Orthodox Church in America. (More information can be found HERE .)

A festive banquet followed with traditional Middle Eastern cuisine prepared by the sisterhood and Thomas Tadros.